Let’s face it, the guy is pretty much a global icon. He has kept us up many nights past our bedtime just so we can step on some goombas and jump on some turtles. Super Mario Bros on the classic Nintendo is where he really took off. Then came Super Mario Bros 2 and 3. Mario likes to save Princess Peach from castles, but he enjoys other activities as well. He is pretty versatile believe it or not.

Some (non-popular) Mario games have been swept under the rug. I am going to bring back the memories and list the top Mario spin-off games of all time (in my opinion).

Take all of the Mario characters that we have loved over the years and throw them on a virtual board game (sounds awesome, right?). Throw in dice to roll, some coins and a star to collect and you have party…. a Mario Party. This is the ultimate, quick, fun, sit down and play Mario game. There have been 9 Mario Party games (so far, since this post) and I think Nintendo can make 100 of them.

The basis of the game is to win mini-games and collect coins. In Monopoly when you pass Go, you get $200. Instead of gaining $200 in Mario Party, if you have enough coins you can exchange them for stars. Whoever has the most stars when the game is over, wins! This game is a lot of fun especially when playing with a lot of friends. Definitely worth of a spot in the top Mario spin-off games.

Mario loves his sports. There have been games such as Mario Golf, Mario Baseball, Mario Basketball and Mario Soccer. I would not be surprised to see Mario Volleyball. Let’s not forget about Mario Tennis either which makes #2 on my list.

Mario Tennis is not like regular tennis. Sorry to say but, tennis on television is pretty boring. Two people hit a little, green ball back 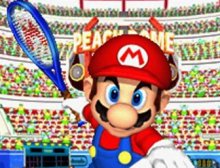 and forth over a net until someone misses. That is not very exciting at all, but when you add Mario and his gang to the mix, it is a lot of fun. Mario Tennis has backhands and even drop shots. It still stays true to the game of tennis, but for some reason it is a lot more fun than real tennis. It is faster paced and playing doubles with a friend makes it even more exciting.

Mario Tennis for the N64 was fun, but Mario Power Tennis for the GameCube is a lot better. In the GameCube version, players have a special shot that adds a whole new element to the game. Take Diddy Kong for instance. When you use his special shot he will automatically go to the ball and hit is back. It is not your normal return though, he puts a crazy banana shaped curve on the ball, making it hard to hit back. This game takes tennis to the next level. I sometimes wish real life tennis was exciting like it is in Mario Tennis.

Who even knew that Mario was old enough to drive? I honestly never knew he was able to. I also didn’t know that a dinosaur and a monkey were capable of operating a vehicle. I have no clue who passed them for their drivers licenses. Whoever it was, I would have to thank them.

Mario Kart is the hands down #1 Mario spin-off.

There have been Mario Kart games released for handheld systems like the Game Boy Advance and Nintendo 3DS. The classic Mario Karts on the N64 and GameCube is where it’s  at. Mario Kart puts Mario and his crew behind the wheel of go-karts and lets them race to the finish. It is no simple three lap race though. There are items that you can pick up along the way. Some of them include, shells that you can throw at other divers and bananas that you can place down, in hope that your opponent drives over it and spins off the track.

Mario Kart first started off as one person behind the wheel. Then Mario Kart Double Dash was released on the GameCube that featured two drivers on one cart. One driver would throw the items and the other would drive the cart (you could switch back and forth between drivers). Each character has a special item, similar to special shots in Mario Tennis. The courses are awesome as well. Courses take place in deserts, jungles and even on top of Daisy’s Cruiser. Yes, you get to drive on a yacht in the middle of the ocean.

Mario Kart is a classic and is my #1 Mario spin-off game! (Debate below!)

vinnylanni Copyright © 2012 All rights reserved Unauthorized use, duplication, or reblogging of this written material without explicit written permission from this blog’s author and owner is strictly prohibited. Links may be used, provided that full and clear credit is given to Vinny Lanni and Word, Sentence, Story with proper and specific direction to the original content. Photographs featured are free to use images unless credited.
Loading Comments...